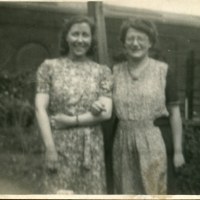 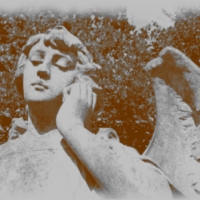 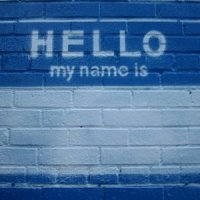 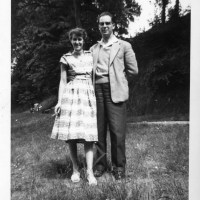 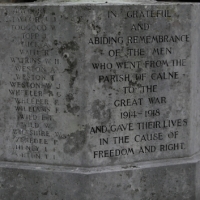 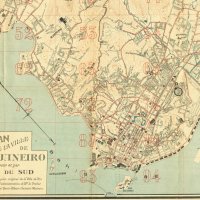 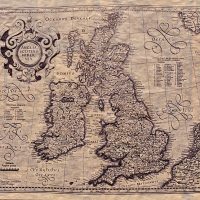 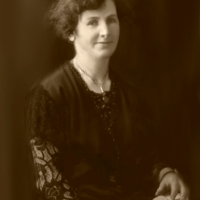 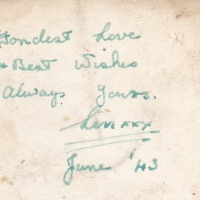 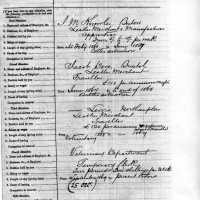 My Connection to the Emerald Isle

For a number of years when I was younger, my father spoke of our MacDonald family, proud of the connection to a Scottish clan. He knew he had a connection to MacDonald’s via his maternal grandmother, but didn’t know much really beyond that.

When I first started researching our family tree back in 2003 I was expecting to come across some Scottish links. As I worked backwards from his maternal grandmother Annie Large, I found that her mother Eunice was a MacDonald – but she was born in Mossley, Lancashire. From her marriage certificate to James Large in 1897, her father was given as Elias MacDonald (deceased) a Minder (this was an occupation in a Cotton Mill – minding one of the multi thread spinning machines.) 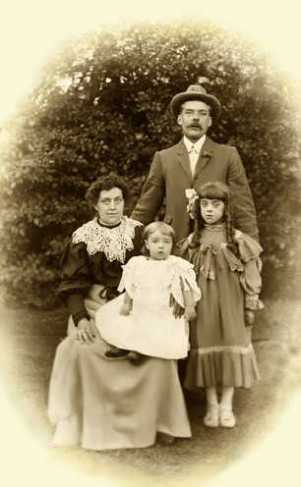 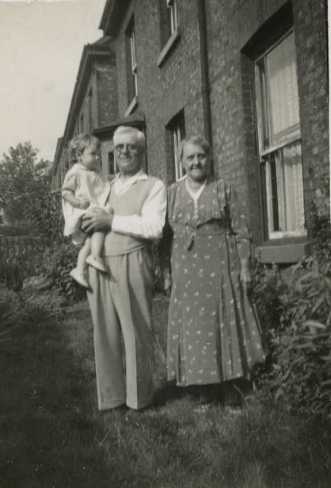 Photos above are of Eunice with her husband James and two of their children, Annie and Dorothy taken circa 1907 and then again with their granddaughter – my paternal grandmother Joan taken circa 1925. I have previously written about James and his family here.

I came across a couple of interesting entries in the newspapers to do with Elias – he was a witness in a case of a publican accused of allowing people to play cards and gamble in his pub. It was reported in The Ashton Weekly Reporter and Stalybridge & Dukinfield Chronicle of 6th February 1869.

He was in the papers again in April 1871 – this time being the one in trouble.

“Pot Valiant – Elias MacDonald pleaded guilty to a charge of drunkenness and riotous behaviour at Mossley, on the 19th ultimo. – Constable Hornby detailed the facts. – Samuel Hall was also charged with a similar offence on the same date, and pleaded guilty, Constable Kirby proving the facts of the case. – It appeared that in both cases the defendants were inclined for fighting in different places, and both received the same sentence, viz, 5s and costs, or seven days.” Sounds like he was known for getting into trouble with fights!

I traced Elias back – noticing that his surname MacDonald was often spelled McDonald and McDonal. He was the son of another Elias MacDonald/McDonald and an Elizabeth. Imagine my surprise when I located Elias senior on the 1851 census with a place of birth of Ireland! The 1841 census also gave Ireland as his place of birth, but sadly the 1851 census didn’t elaborate further to give me a county or a town.

Elias senior was a Labourer according to the two censuses and I found he had died in 1860. His death certificate provides a little more detail around his occupation, being a Stone Mason’s labourer. He died of Anasarca – this is where the tissues retain a lot of fluid, often referred to as extreme generalised oedema. It is usually a sign of severe organ damage or illness. There is no other information on the certificate to explain the cause, other than it had been affecting him for 3 months. He was buried in Mossley on 7th January 1860.

Elias senior and his wife Elizabeth had several children – Sarah b. 1824 in Carlisle, Cumbria, Isabella b. 1828 in Whitehaven, Cumberland, Margaret b. 1830 in Hyde, Cheshire, John b 1833 in Newton, Cheshire, Elias b. 1836, Joseph b. 1838 and Ellen b. 1839 all in Newton and then their youngest child James b. 1841 in Glossop, Derbyshire. They moved around a fair bit. So far I’ve not been able to locate any baptisms for the children – it is possible they had Catholic baptisms in parishes where the records are not yet online.

I found Elizabeth’s maiden name through ordering their son James’s birth certificate which gave it as Leech. It doesn’t appear that Elias and Elizabeth registered the birth of their son Joseph but I did locate one for Ellen which confirmed Elizabeth’s maiden name was Leech. I’ve also not found a marriage record for Elias and Elizabeth. It is possible they had a Catholic marriage, or that they actually never officially married. I found evidence that Elizabeth had a child out of wedlock around 1820-1822. It took some detective work to find out more about Elizabeth Leech. In the 1851 census Elias and Elizabeth have a full house – with them were Margaret, John, Elias, Joseph, Ellen and James, along with their married daughter Isabella and her husband Joseph Bowden and their son Thomas, a granddaughter Elizabeth Elkin, a nephew Thomas Rodgers and a lodger Charles Stuart. Fourteen people in one house!

I found that Elizabeth Elkin was the daughter of Robert Elkin and Mary Leech – Mary being Elizabeth’s illegitimate daughter. She and Robert married in Mottram in Longdendale in 1840 and settled in Glossop where Robert was from. Her marriage certificate states her father was John Leech, a farmer. It is likely he was made up to cover her illegitimacy. I had found a baptism for Mary in 1822 in Whitehaven, daughter of Eliza Leach.

I then looked into the nephew Thomas Rodgers, (actually Rogers) he was 6 months old and born in Salford, Lancashire. I found he was the son of a Thomas Rogers and an Isabella. Thomas was Isabella’s second husband as she had previously been married to Robert Wilson. She had four children with Robert; Robert, Elizabeth, Isabella and Mary Ann, Robert died possibly in 1835 before his youngest child was born. Isabella married Thomas Rogers in September 1837 – just in time for civil registration which allowed me to order her marriage certificate. It showed she was Isabella Wilson – widow – daughter of Joseph Lynch – an Overlooker. Could Lynch be Leech?

Isabella and Thomas had seven children, John, Ellen – two Williams who both died in infancy, Thomas William (also died in infancy), Sarah Ann and the Thomas who was with his aunt and uncle in 1851. According to the 1861 census Isabella was born in Whitehaven, whereas the 1871 census states Newcastle. I cannot find the family in 1851, but I know many Manchester area census returns for 1851 were damaged by flooding so some are illegible. Thomas Rogers senior died in 1870 and Isabella married for a third time to George Renton in 1876. Their marriage certificate states that Isabella’s father was Joseph Lach, an Overlooker. I then found a baptism in Newcastle upon Tyne in 1807 for an Isabella Leach, born in 1806, daughter of Joseph Leach a Weaver of Tottington, Lancashire and his wife Isabella, daughter of George Dodds, Yeoman of Wooler, Northumberland. Elizabeth – Elias’s wife, her place of birth was given as Tottington on the 1851 census. I found a baptism in 1802 in Tottington for a Betty Leach, daughter of Joseph and Betty. I believe the mother’s name may be a mistake and should be Isabella.

Joseph and Isabella married in 1799 in Gateshead, Durham not far from Newcastle upon Tyne.

So while that gave me information about Elias’s wife, Elizabeth Leech/Leach, I was still no further on with Elias and his ancestry. I know he was born somewhere between 1780 and 1791 – his age differs across the censuses. In 1841 he is down as being 50 – so born around 1791, and in 1851 down as being 61 so born around 1790. On his death certificate he is aged 79 – so born around 1781 – but the informant of his death was his daughter in law Jane. His burial entry gave his age as 80 – so born around 1780. I also found a reference to him and Elizabeth in the Derbyshire Criminal Registers when they were committed for trail on 24th September 1846 by J Chapman, Justice of the Peace and tried before the High Sheriff, Sir Robert Edward Wilmot at the Quarter Sessions on 20th October 1846 on the charge of stealing yarn cops worth £32 15s from Joseph Berrisford and Co. at Glossop. They were acquitted. They were at Derby County Gaol while awaiting trial. This was reported in the Derby Mercury on 30th Sept 1846. Elias was 57 and Elizabeth was 45. So Elias was born around 1789 according to that entry.

I know that three of Elias and Elizabeth’s sons emigrated to the US, John, Joseph and James. They seemed to keep the spelling of MacDonald, whereas the others tended to switch between MacDonald and McDonald. At times on the US censuses they stated their father was from Scotland rather than Ireland. It is likely they didn’t really know – or their spouses were giving the information and they didn’t know either.

After Elias’s death in 1860, Elizabeth remarried in 1862 to a Thomas Whitehead. Her father was given as Joseph Leech, Weaver. Elizabeth died just 6 years later in 1868 and her widower Thomas died in 1876.

I’m still no further forward with knowing more about Elias, or where in Ireland he was from. I do wonder if he and Elizabeth were ever properly married, which may explain the lack of baptisms for their children. Of course it may be that the relevant registers or transcriptions just aren’t online yet. 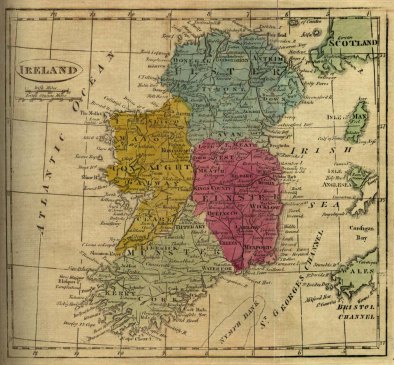 1808 – Ireland From The General Gazetteer; or, Compendious Geographical Dictionary

A few years ago when I took an Ancestry DNA test it revealed that in my ethnicity split showed 23% Irish. Although it has been updated more recently to state that it is 23% Irish/Scottish/Welsh. I got my parents to do DNA tests too, and I was surprised to see that my Mum also had 15% Irish in her results as I have not yet come across any Irish link with her family – however of course that too has been updated to be Irish/Scottish/Welsh and my Dad’s showed 18% Irish – again now Irish/Scottish/Welsh. Given he has a huge amount of Welsh ancestry, it is likely a combination of the two. Whereas my mother’s mother was apparently the daughter of a Scottish solider in WWI, so her percentage may well relate to the Scottish element. 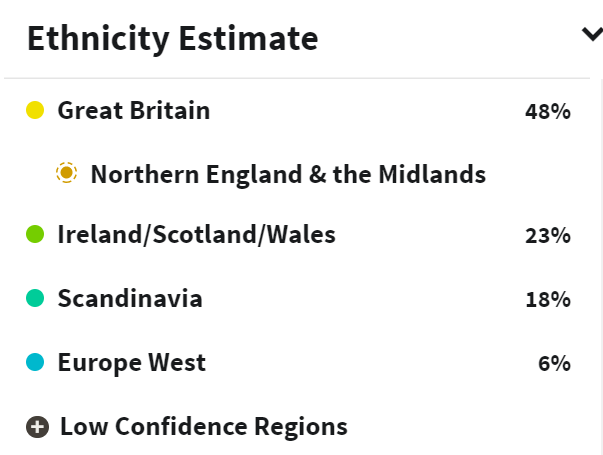 My DNA ethnicity split (from Ancestry)

What I did find interesting was that the MacDonald family also connected to my mother’s family – although it was a distant connection, but given that many of my parents families lived in close proximity to each other during the 1800s, I was surprised that there hadn’t been any other crossovers. Elias and Elizabeth’s daughter Sarah MacDonald had been married to a Bold Bradshaw, they married in 1844 in Glossop and they had two children Elizabeth and John. Sarah and Bold separated sometime after 1851. By 1861 she was living with a lodger William Stafford, but she had children with him, Ann, Eliza, Agnes and Mary Ellen. They never married. Sarah died in 1885 and after that William lived with his brother’s widow Ann – they seem to have lived as husband and wife although they too never married. William was the cousin of my 2x great grandmother Sophia Stafford – on my mother’s side. His father being the brother of Sophia’s mother Mary Stafford (who in turn was likely a distant cousin of her husband – William Stafford!)

Do you have any Irish ancestry? How have you found researching it? Has it been a challenge? Let me know!

3 thoughts on “My Connection to the Emerald Isle”